Faking her death was easy, living with her past is harder, but nothing is more dangerous than falling in love…

Sandra Walsh was a deadly sniper for the Sweet Briar Group, a covert agency with assassins for hire, until her last mission went horribly wrong, accidentally killing an innocent girl. Knowing she’s a danger to her team, Sandra goes off the grid, becoming a Shade—an agent declared dead but secretly hiding among the living. She intends to honor her vow never to pull another trigger or have contact with the spy world again. Until she meets Casper Grady…

Grady is a former Marine with a troubled past and a debt to pay. His life mission has gone from protecting the nation to helping local children and their families. The moment he meets Sandra, he knows there’s more to her than meets the eye, but he can’t help but be drawn to the mysterious femme fatale. And when Sandra’s past suddenly catches up to her, Grady is determined to protect her at all costs, no matter how dark and dangerous her secrets are.

As the danger increases, so does their intense attraction. But when they’re forced to choose between each other and the people they’ve sworn to protect, their growing love might not be enough to keep them together—or alive… 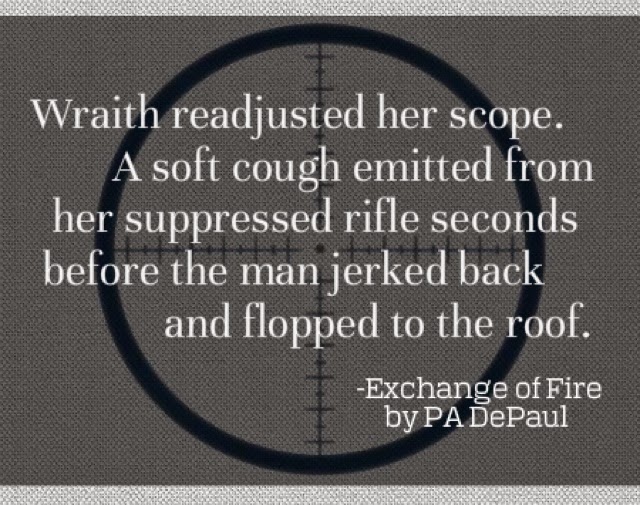 About the Author P.A. DePaul is a multi-genre romance author including paranormal fantasy and romantic suspense. She originally hails from Carroll County and Baltimore County, Maryland, but also lived in Macon and Warner Robins, Georgia. She currently resides in a beautiful community just outside Philadelphia. Exchange of Fire is the first novel in the SBG series with the second novel, Shadow of Doubt, releasing April 2015 Website | Facebook | Twitter | Goodreads | Pinterest The Giveaway! PA is offering a tour wide giveaway of 5-- $10 Amazon or B&N gift cards (winner’s choice) plus 4 e-copies of Exchange of Fire (sent via Netgalley). Just check out today’s post, leave a comment, and then fill out the giveaway widget!

Follow the Tour! Be sure to check out all of the stops! Read fun,new content at each stop plus learn extra ways to enter the giveaway! For the main event page please visit… this page. 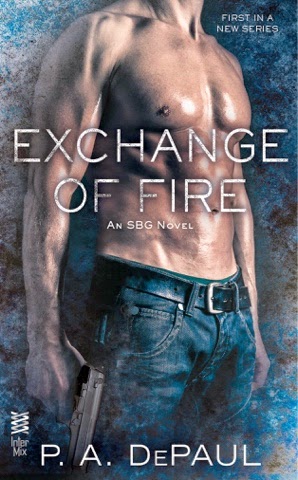 I hope you’re in the mood for some steamy, action-filled Romantic Suspense! I’m hoping with four words I can convince you to add Exchange of Fire, SBG #1 to your TBR pile. Ready? Okay: Female sniper. Former Marine.

Convinced? Dang. I can’t see if you’re nodding or not. Well, hopefully between the back-cover blurb and my four little words above you’ll click on one of those retailer links to enter a world where a clandestine Black Ops team works for SweetBriar Group (AKA SBG), a corporation the public believes is an environmental company, and risks their lives on missions no one can know about.

FYI, Shadow of Doubt, SBG #2 (releasing April 21, 2015) continues with another member of Delta Squad, you know, just in case you wanted to read Cappy’s story (He’s the C.O. of Delta).

Thank you so much for spending time with me today. I truly appreciate each and every one of you! <3

The following excerpt is from the opening chapter. Wraith (our heroine) is hidden on top of a building in a ratty Mexican town with her rifle trained on a warehouse’s windows. She’s the expert sniper of Delta Squad, and they’ve been tasked with ending a drug cartel’s sex-slave ring. In this opening chapter they have two assignments, capture/kill the head of the cartel and rescue a teammate who went undercover as a victim so the team could track the slave-trader’s movements. FYI, Cappy is Delta Squad’s C.O. and Romeo is another member of the team.

“That means it’s go time, people,” Cappy said, tension tingeing his voice. “Just like we planned. Meet you at the rally point.”
Wraith readjusted her scope. Both rooftop sentinels appeared more focused on the young girls climbing out of the truck than watching the area. Idiots. Made her job much easier. She exhaled and aimed for the farthest guard. As soon as he stepped back from the edge, she lined his head in her crosshairs and pulled the trigger. A soft cough emitted from her suppressed rifle seconds before the man jerked back and flopped to the roof. Before the other guard had a chance to react, she had him in her sights and took him out.
Thwump. His body dropped hard onto the concrete roof.
Two of the guards sitting nearby looked up.
Shit. The bastard’s foot hung over the edge.
The guards jerked to their feet and stepped into the street for a better view.
“Be advised. Clusterfuck warning,” Wraith announced. “Rooftop guard landed wrong. Two on the ground now alert. Kids still playing at opposite end of street out of their line of sight.”
“Check,” Romeo answered. “I’ve got the guards.”
Thirty feet down, a shadow separated from the rest. It crept along the edge of the building and Romeo emerged into the sunlight right in front of the guards. One started to shout, but Romeo gripped him around the neck and twisted. He then raised his silenced Glock and shot the second guard in the chest. Romeo dragged the second man out of the street and dropped him in the shadows on top of the other.