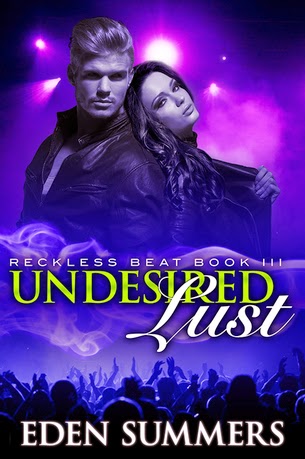 They used to be the perfect team.

Two years ago, songstress Sidney Higgins ruined her life by sleeping with not one, but two of the famous Reckless Beat men, Mason Lynch and Sean Taiden. Their night of intimate celebration turned into a worldwide sensation when the video Mason vowed to keep private was uploaded to the internet, destroying her squeaky-clean reputation and turning the world against her. Now she’s broken and left without hope, trying to find the one thing that can get her back on her feet.

A mistake neither one of them is willing to forgive.

When the sex tape went viral and his best friends held him accountable, Mason bore the stigma of asshole with pride. Now, bitterness has destroyed him, driving away his muse and making him worthless in the industry he loves. There’s only one option left to reclaim his creativity, but that would mean collaborating with a woman who wants to castrate him with a plastic knife.

Forced to work together, neither one of them is prepared for the undesired lust which immediately takes hold. The lies fade away, exposing the truth; however, it also awakens a threat from their past. The person responsible for tearing them apart is back to ensure they don’t rekindle a spark. With their safety in the balance, Sidney and Mason need to determine what they’re willing to risk to reclaim a relationship they wish they’d never lost.

In late 2010, Eden's romance obsession could no longer be sated by reading alone, so she decided to give voice to the sexy men and sassy women in her mind.
Eden can't resist alpha dominance, dark features and sarcasm in her fictional heroes and loves a strong heroine who knows when to bite her tongue but also serves retribution with a feminine smile on her face.

She whimpered, testing the restraint of his hands, needing to touch him, to trail her fingers along the strong lines of muscle at his shoulders. There was no doubt she lacked the finesse of all the groupies he’d been with. She wasn’t a cock slayer. But she wanted to give him pleasure. She needed to blow his mind.

He tightened his grip, not letting her free. “I’ve wondered what you taste like,” he murmured, moving to her other nipple. “I’ve pictured these breasts for nights on end.”

Oh, god, Mason Lynch. This moment would forever go down in history as the best drunken mistake of her life.

“I don’t believe you,” she panted. “You have millions of women at your disposal.”

“And the only one I wanted was you.”

His fingers slid through the slick arousal of her pussy, and her core clamped down in response, begging for penetration. He pinched her clit, the light nip of pain making her jolt before he filled her with his touch. “Watching you with Sean nearly killed me.”

She expected the previous lines from a playboy of his caliber, but not his latest admission. Even though his tone and his touch matched the sincerity of his words, she would never believe he had feelings for her. She couldn’t. If she fell under his spell, she’d never recover.

Opening her eyes, she stared at him in annoyance. “Don’t play me.”

He released her hands, letting her arms fall to her sides while his thumb gently rubbed her clit. “Ask me in the morning, and I’ll deny it, but you undo me, kitten. I’ve never had a woman intrigue me like you do.”

“And the Grammy for Best Rock Song goes to…”

Sidney Higgins held her breath, her gaze glued to the presenter aglow in stage lights. Mason Lynch sat to her left, his hand holding hers in a reassuring grip. Tonight, he was more gorgeous than usual, in a tailored black suit and his blond, wavy hair loose against his jaw line. She didn’t need to glance his way to know his confident smile was aimed at her. She could feel it on her skin, the light tingle of awareness which always haunted her whenever he was close.

“Don’t sweat it. We’ve got this in the bag,” he murmured over the hush in the room.

His arrogance never ceased to amaze her. It was natural to him. Effortless. Strangely, she found it endearing. His confidence rubbed off on her, increasing her sense of accomplishment, not only in her career, but life in general.

Right now though, his sonic boom of awesomeness wasn’t penetrating her nerves, or her need to use the bathroom. This was her first Grammy nomination, and the butterflies alone were enough to make her double over.

They did it. They won a fucking Grammy.

“I don’t believe it.” The words tightened her throat, whispering from her lips as thunderous applause erupted around them. She turned her wide-eyed gaze to Mason and found him staring at her, grinning. No elation. No shock or disbelief. He simply stared at her as if the sun rose and set in her eyes.

Someone clapped her shoulder, followed by another and another. She was too awe struck and numb to notice who. Her focus was glued to the gleaming, mocha-brown irises of the most talented man she’d ever known. He stood, continuing to hold her hand and her attention as he tugged her to her feet.

Ovaries—boom. That endearment did it to her every time. Her nipples hardened. And right now, in a skintight evening gown and thin lace bra, she couldn’t think of anything worse. Think of dirty dishes, laundry, clubbing baby seals. Hell, even the thought of the unsigned recording contract currently sitting on her dining room table wasn’t enough to drag her mind from lurid thoughts of Mason.

Clearing the gravel from her throat, she followed him into the aisle leading to the stage, and sneaked a glance over her shoulder at the hundreds of applauding people. Surreal. The man of her dreams at her side. A Grammy waiting to be awarded. The world at her feet. Tears stung her eyes, and her grin turned into a beaming smile. Everything fell into place. Life was perfect, and maybe this achievement would stop her father from worrying about her risky career choice.

Mason tugged her into his arms and then squeezed her tight, placing a gentle kiss on her cheek. “Congratulations, Sid,” he whispered against her neck, sending a shiver of awareness down her spine.

She hugged him, her pulse pounding in her ears. “We really did it.”

“You doubted our unstoppable skills? The world doesn’t stand a chance against us.” He pulled back, gifting her with another delicate sweep of his lips, this time on her temple. “Now let’s go get our prize.”
Posted by Unknown at 7:12 PM