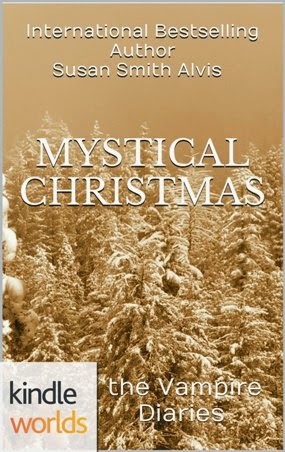 What if everything you wanted was all within your reach but not yours for the taking?

Klaus and Stefan are tearing through the South collecting hybrids and leaving a trail of dead bodies behind them. Unable to reach Stefan any other way, Elena devises a holiday plan to lure Stefan back home.

Damon thinks Elena is wasting her time and fears the worst. He and Stefan no longer celebrate Christmas, but if Klaus approves Elena’s request, Damon will support her by giving her what she wants—a traditional Christmas.

What Elena wants and what she gets are two different vampires altogether. Elena approaches Klaus and asks for Stefan’s release, even if it’s only for one Christmas weekend. Klaus agrees, but his terms and conditions are nonnegotiable.

Soon, Elena is holed up in a snow-covered chalet with the Salvatore brothers and Klaus, an original vampire with an unusual agenda. And he’s gone to great lengths to find out who Elena really loves.

I used to love mystery and danger. Like other teenage girls, I’d often imagined what it might be like to find myself in the middle of a catastrophe, stuck between two great forces—like good and evil—only far more dramatic.
At that time, Stefan and Damon Salvatore didn’t exist in my world. The world—at least the one I lived in—was less complicated. My days then were in black and white, with an occasional burst of color and flare, compliments of Caroline.
Then the Salvatore brothers entered my life and everything changed. I soon learned there wasn’t a line of division down the middle with these two. And after I met Damon and Stefan, my former life faded to black and now the past seems surreal.
I look down at the Salvatore driveway, now lined with packed snow and jagged tracks and wonder how I could’ve been so naïve. Who was that young girl who compartmentalized thoughts, people, places and things?  Why didn’t she take the time to see the bigger picture with more multidimensional aspects, more depth?
As I think about the coming hours with a mix of dread and a dash of excitement, I now know a well-rounded life takes a triangle’s shape. Life isn’t clean and tidy with a circular rotation driven by nature to lead us all back to where we started. It’s not boxed up all nice and neat with defined planes and specific instructions to make our days easier. How boring would that be? Then again, after barely surviving these last few months, boring sounds like a little slice of heaven.
It’s the most wonderful time of year or it is for those who believe in the two-sided world, the world beyond this window, the one where others grade their mere existence by good or evil.
But there is a third entity or force. And he’s standing right behind me.

“You promised to release him while we’re in Tennessee.”
“And I will,” Klaus assured her. “Once we’re settled in and before the sun goes down.”
“Is there a ‘but’ in there somewhere?”
“All right, Elena, you win. I’ll let you in on a little secret.” His demeanor changed then. “You can’t play with fate or run from it, love. Katerina tried and as you saw for yourself, she failed on numerous occasions. She also loved two brothers as you love two brothers.”
“I never said—”
Klaus held up his hand. “Let me finish. Damon gives you what you need, what you must have at any cost. Stefan, on the other hand, gives you what you want—the ability to stay committed to your high moral standards. The Stefan you know gives you a normal relationship, an acceptable bond. Your friends like him. Your teachers accept him.”
“What about the Stefan you know?”
“The Stefan I know would rip your pretty little neck apart if I so much as compelled him to do so.”
She swallowed, processing. Klaus wanted to hurt her. He wanted to watch how she interacted with the Salvatore brothers. He would then later use what he learned against her. “You made Stefan into something he’s not.”
“On the contrary,” Klaus said. “We’re vampires. That makes us hunters or predators by nature. We’re only killers by choice.”

1. Her mind’s eyes flickered with newspaper clippings about a rampant killing spree, a murderous binge controlled by Klaus and executed by Stefan.

2. “On the contrary,” Klaus said. “We’re vampires. That makes us hunters or predators by nature. We’re only killers by choice.”

3. "Stefan’s weapons are embedded in his gums. No one hands him anything. He takes what he wants.”

4. "You and Damon probably weren’t supposed to spend Christmas together. You aren’t exactly an ideal mistletoe-seeking pair.”

5. "At the end of the day, you’re nothing more than a bleeding vein to him, Elena.”

6. Their love washed over her like a high tide racing toward shore in the middle of a devastating storm, a volatile gale that would temporarily calm before striking with brutal force in the desolate hours of a quiet holiday night.

7. “Proximity is a real bitch when you’re the only one with a beating heart in a houseful of vampires.”

8. “You can make a deal with the devil but it doesn’t mean you have to follow him back to hell.”

9. "Far be it for me to break the news here, but we’re both dead, brother.” Stefan lifted his glass. “I thought you knew.”

10. "I can’t pretend I don’t have feelings for you when every single time I look at you, I only see an extension of me.”

11. “It’s hard to choose a side when your heart draws its sword for one cause while your head supports another.”

About the Author: Susan Smith Alvis has been a career author for over a decade. With over 300 titles to her credit, her pseudonyms have been award-winning authors with international bestsellers in most genres. To find out more, visit her book page at Amazon. To sign up for updates and future release date announcements, email her at susansmithalvis@gmail.com