Luck of the Irish Pre-Order Blitz 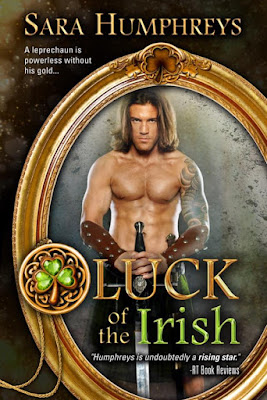 A leprechaun is powerless without his gold….

Banished to the mirrored realm for hundreds of years, Declan Aherne had nothing but time to plot his revenge and mourn the loss of his beloved wife. But when a beautiful human woman, with a familiar amulet, stares into the mirror….Declan’s luck was about to change.

The gold emblem, the one that matched her necklace, sat at the top of the oval gilded frame, and when she leaned closer she realized that it was a recessed space. She ran her finger over it and let out a shuddering breath. Maggie had a sinking suspicion that the amulet around her neck would fit perfectly in that space.

“A key,” she whispered through trembling lips. “Aunt Lizzie said the amulet was a key to release the leprechaun from his prison.”

Rising to her feet, Maggie carried the mirror down the narrow hallway to her bedroom. She bumped the door open with her hip and stepped into the small, cozy green and white room. When she changed clothes earlier she’d already removed the old print and left the blank spot above her dresser for her long sought after prize.

With great care she hung the mirror onto the nail and adjusted it so that it was straight. She stepped back and inspected it as she removed the amulet and gold chain from around her neck. The heavy, gold disc felt warm in her palm as she curled her fingers around it and debated what to do next.

Part of her was as eager as a kid on Christmas Eve brimming with anticipation. She wanted to slip the amulet right into that spot on the frame and see if the fairy tale was true. But the other part of her, the one that dominated at the moment, was reluctant. Not because she was afraid of a leprechaun jumping out of the mirror.

In fact, it was exactly the opposite.

What if after all this time and all the searching she puts the amulet in the mirror and nothing happens? That would be a big, fat, fucking let down of colossal proportions.

Tears stung her eyes and she sniffled, laughing out loud at her foolishness. How long had she been searching for the mirror never really believing she’d find it? The hunt for this treasure was what kept her going after family was gone. It was like an invisible tie that kept her connected to them, but now she’d found it and the hunt was over.

It was a stark reminder that her family was never coming back.

“I wish the story was true, Aunt Lizzie,” she whispered. “But true or not, thank you for sharing it with me….I miss you all so much.”

She turned her teary gaze to her reflection as she ran her fingertip over the amulet. It was time to face the truth and stop hiding inside her own fairy tales, the ones she perpetuated every time she went in search of the magical mirror from Aunt Lizzie’s stories. She had to face the reality of the world she lived in.

Her family was gone and they weren’t coming back. The mirror wasn’t magic and she wasn’t anything special, and the only way to really face it was to put the amulet in the mirror—and watch as nothing happened.

Fairy tales weren’t real.
Neither were leprechauns or warlocks.
No more hiding from the world or retreating into fanciful stories.

“Time to face the truth.”

Maggie pressed the amulet to her lips before reaching up and slipping the disc into the recessed spot at the top of the mirror. The moment it clicked into place she whispered the Gaelic phrase Aunt Lizzie always uttered when she told this part of the story. “Scaoileadh mé tú.”

At first nothing happened and Maggie was ready to drown herself in the rest of the chardonnay. She was about to leave the room in search of the wine when a ripple in her reflection caught her eye. Maggie swallowed hard and squinted, not sure she was actually seeing what she thought she was seeing. But sure enough the glass surface of the mirror began to undulate and swell like silver waves in an otherworldly ocean.

She backed up as her image in the mirror blurred and a low, pulsing throbbing sound began to rumble through the room. Maggie scrambled backward and up onto the bed as the deafening noise grew louder by the second. Her hands flew to hear ears, the pulsing noise permeating every single cell of her body making her teeth clatter. It felt like the entire building would come down around her any second and if she wasn't completely paralyzed by fear, she might have run.

But Maggie couldn’t move. She curled up into the fetal position, hands over her ears, as the world rumbled around her. She half expected the ground to open up and swallow her whole.

A split second later, the mirror erupted in an explosion of light and Maggie squeezed her eyes shut. As a scream threatened to rip from her throat the world went completely silent and still. No more bone rattling throbbing running through the air. The shaking and trembling had ceased, except for her body. She was quivering like a damn leaf and cowering on her bed like a total coward.

Her heart hammered against her ribcage and her eyes were screwed tightly shut as the unmistakable sound of someone breathing heavily filled the room. At first, she thought it was her own breath because she was huffing and puffing like she’d run a freaking marathon. But about a second later, it became glaringly clear she was no longer alone.

The fairy tale was true. 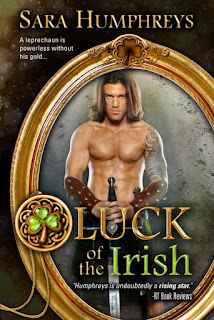 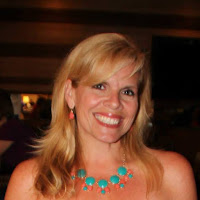 Sara Humphreys is a graduate of Marist College, with a B.A. Degree in English Literature & Theater. Her initial career path after college was as a professional actress. Some of her television credits include, A&E Biography, Guiding Light, Another World, As the World Turns and Rescue Me.

In 2013 Sara's novel UNTAMED won two PRISM awards--Dark Paranormal and Best of the Best.
She loves writing hot heroes and heroines with moxie but above all, Sara adores a satisfying happily-ever-after. She lives in New York with her husband, their four amazing sons, and two adorable pups. When she's not writing or hanging out with the men in her life, she can be found working out with Shaun T in her living room or chatting with readers on Facebook.