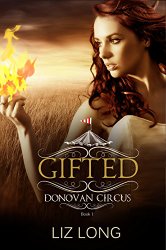 Even in a world of freaks, being a Firestarter is considered a dangerous Gift.
Lucy was born with the ability to create and control fire. She longs to leave the human world for one filled with Earthshakers, Transporters, and Chameleons, to name a few. When she rejoins the circus, it's everything she hoped it could be - new friends, a potential love interest or two, and a place where she can be herself.
When troupe members begin turning up dead, however, Lucy is suspected of foul play. She must not only prove her innocence but also realize the full extent of her power. To find the real murderer, she must uncover the truth behind her father's fiery legacy while figuring out whom to trust within her new circle. Little does she know the history of the Donovan Circus and its enemies might actually destroy the entire gifted world.
Buy Links
Amazon 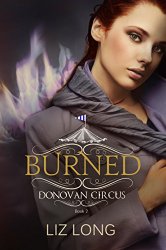 Nearly a month after Lucy Sullivan saved the Donovan Circus from certain death, she discovers that Dr. Felix Hardy wasn't the only bad guy around. When Lucy is attacked on home ground, Sheffield Donovan reveals that there are bigger foes in their world, gifted that use their powers to kill others - including her own family, as she learns from her ringmaster mentor. Medved, a Russian thug and powerful Shapeshifter, is intent on outing the gifted world and will stop at nothing to succeed.
In order to survive, Lucy and her friends must travel to another show, the Grayson Circus, for help. The uneasy alliance with owner Albert Grayson comes with potential new friends and dark secrets about their competition, including a troublemaker named Mel and an old flame of Lucy's father. Lucy must also contend with her feelings about Keegan and Gabriel, as well as learn how to contain her rampant emotions or risk setting the entire place ablaze.
Will Lucy be able to save the Donovan Circus again? Or will Medved and his men slaughter everyone in their path on the way to gifted domination? 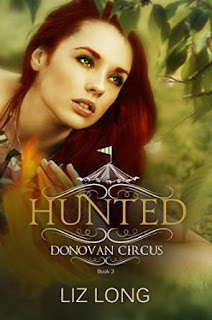 Lucy Sullivan finally belongs with the gifted Donovan Circus. Members are finding their rhythm, even the new folks from the Grayson Circus who joined after the last attack. Lucy feels like a trusted leader who can win the gifted battles and prevent humans from discovering their existence.

When tragedy strikes camp, a distraught Sheffield sends Lucy and her gifted team to hunt down the enemy – Alex, a Chameleon with a wicked ability for war. He’s out for blood and won’t stop until Lucy and her friends are dead.

This time, it won’t be Lucy’s gift that is tested – it will be her morality. To save her circus, the price will be greater than she ever expected. This time, she will lose someone she loves. And it will change everything.
Buy Links
Amazon 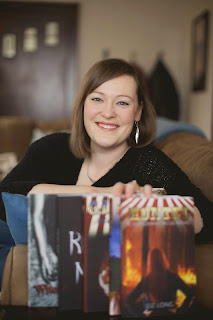 Liz Long is a ridiculously proud graduate of Longwood University with a BA in English. Her inspiration comes from action and thriller genres and she spends entirely too much time watching superhero movies. Her fabulous day job as a Social Media & PR Strategist includes writing for LeisureMedia360 (Roanoker, bridebook, Blue Ridge Country magazines) in Roanoke, VA.

She currently has five books out. The Donovan Circus series has best been described as "X-Men meets the circus with a murder mystery thrown in." Witch Hearts tells the story of a serial killer hunting witches for their powers. A Reaper Made, is a fantasy about a Reaper who must work a little magic to save her family's souls from demons. All titles are available for paperback or ebook on Amazon, Barnes & Noble, and iBooks.

To learn more about Liz (including more information on her books, plus writing, marketing, and social media tips), visit her website: http://lizclong.com.
Posted by Unknown at 5:18 PM