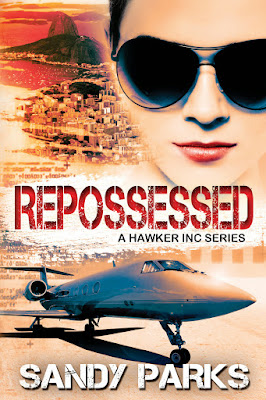 Repossessed is the Winner of the 2013 Daphne du Maurier Mainstream Mystery/Suspense Award and the 2013 Maggie Award for Novel with Strong Romantic Elements written by Sandy Parks.

A reclusive boss.
An unemployed pilot.
One devil in default.

Dunlop’s newest hire, ex-military pilot Amelia “Jet” Walczynski, has the perfect skills for infiltrating Furst’s inner circle and flying away the targeted plane. The assignment appears straightforward until Jet discovers Furst is a sociopath and knows she is after his aircraft. Her promised support team, a Greek lawyer avenging his brother’s death, a con man who sidelines as their scout, and a mechanic who paints her nails to match the country of operation, appear a hindrance rather than help. Jet finds it hard to play nice with her teammates when their private agendas put her life at risk. Yet, the closer she gets to Furst and the plane, the more she and her team will have to rely on each other to complete the repossession.

Gnawing apprehension spread through Jet as Maximilian Furst climbed up from the dark night onto his business plane and cast her a triumphant look. Behind him the door closed and the steward flipped the locking handle, securing the aircraft and effectively cutting off rescue if her true purpose were to be discovered.

The cushy leather seat beneath her offered little comfort. Minutes before coming onboard, she’d learned Furst had left a disloyal employee floating face down in a local lake. She drew a calming breath through a fake smile. Had she overestimated her ability to manipulate a powerful man—one who was proving far more dangerous and unpredictable than her boss portrayed?

Looking back, getting onto the Gulfstream 550 had been easy—maybe a bit too easy. Whatever the case, she had to keep a step ahead of Furst if she hoped to find the aircraft’s landing site.

He leaned over her leather chair, using his rock-solid body as unspoken intimidation. Without a word, he picked up the ends to her seat belt and buckled her in. Her heartbeat didn't slow until the plane had taken off from the domestic airport and risen out of the haze into a clear night.

Jet controlled her fear by focusing on the sleek cabin. She related more to machines, particularly those with wings, than men.

“You have an impressive aircraft,” she said, with the proper amount of awe to feed Furst’s overblown ego. She could recite checklists and emergency boldface items for the fifty-million-dollar beauty that surrounded her, but she had to be careful not to reveal her flying expertise. “Will I be as impressed with your home?” Or wherever the plane might land and “magically” disappear.

Maximilian shifted in his seat to face her and tented his long, dark fingers. “After the excess of my party, you will like the peaceful place we are going.”

“Peaceful? I see you more as the type who never rests.” She pointed at a well-developed bicep on his arm, making sure not to touch or even hint at coming close enough to doing so. “Those don’t come from lounging around.”

“Senhorita, you flatter me. What is a strong body without a fit mind? My sanctuary awaits. It cleanses the body and soul of troubles.”

“I find it hard to believe you have many troubles.”

“A man without them has never been tested. Take this plane, for instance. The company and I have a financial disagreement to resolve. My legal sources have informed me impatient Americans have arrived to take it back. They are supposedly in Rio at this very moment.”

Perceptive sources. She held back the gulp striving to launch down her throat.

Maximilian, his spicy cologne still potent after the long night, leaned forward and encouraged her to do the same. She worked out of her seat belt and rather reluctantly moved closer.

With her head near, he softly added, “You, Senhorita de verão, are an American. I believe you have come to steal my plane.” 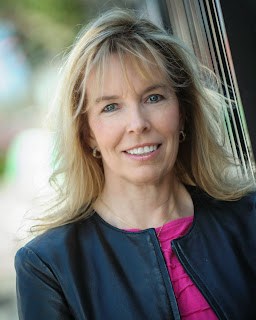 Sandy loves building worlds with memorable characters caught up in ever changing circumstances. She writes in several genres including action adventure thrillers with touches of mystery and romance, science fiction, romantic suspense, and historical romance, some under the name Sandy Moffett. She has won several national writing awards including the Daphne du Maurier Mainstream Award for Mystery & Suspense, Maggie Award for Novel with Strong Romantic Elements, and The Lories for Best New Author Paranormal. Before the days of writing, Sandy was trained as a hydrogeologic scientist, taught at a university, and worked for a civil engineering firm and on an Air Force flight test computer project. Her adventurous background comes from being a private pilot, traveling the world, hiking, scuba diving, and taking over fifteen years of Kenpo karate.