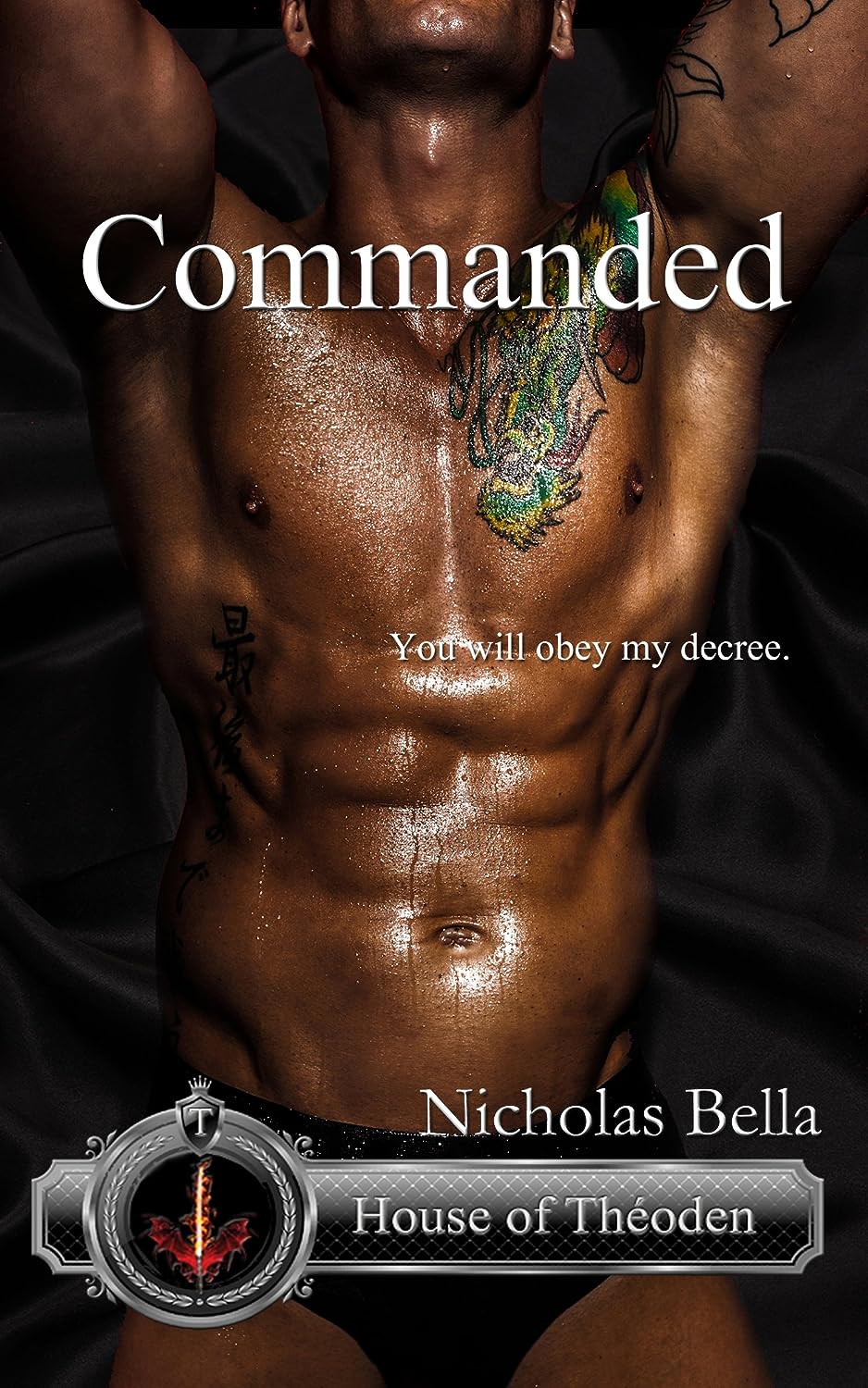 Théoden: On the evening of branding my new son, Noel, my King has called a special meeting of his Court. I can't possibly guess what this meeting is about, as everything within his kingdom is running perfectly. I do know one thing, Ara loves to entertain and be entertained, so at least that's something to look forward to. What I'm not looking forward to is having to see Nolan, Lord of District Four. We really don't get along. Well, as for my children, when the Master is away, the boys will play. In fact, I insist on it.
Noel: I've just received my official brand, the insignia of the House of Théoden. Along with the brand comes a load of responsibilities I am to adhere to. Apparently, my new life involves being an enforcer. I'm to be trained by Marco, my eldest and most sadistic brother. I'm not looking forward to that, not one bit. At least tonight, I'll get a reprieve. For tonight, we celebrate as only the House of Théoden can.

Warning: This serial contains strong adult content not meant for sensitive eyes. The novelettes in this serial will be filled with dark, twisted, raunchy and steamy scenes between powerful, sexy men that will either offend you or get ya revved up. This series will not be pulling any punches, and it won’t apologize for hurting your feelings, either. You’ll find no fluff and ruffles here. The vampires are not misunderstood, hopeless romantics looking for love. The werewolves are not cute and cuddly and the dragons aren’t the ones from your childhood. This is NOT a romance. There are approximately 19,100 words in this novelette.

About me? Hmmm, I'm just a person with a wild imagination and a love for words who was sitting around the house one day and said, "Why hasn't anyone written a book like this before?". As with every storyteller, I wanted to share mine with the world. I like my erotica dark, gritty, sexy... and even a little raunchy. I'm not afraid to go there and I hope you aren't afraid to go there with me. When I'm not writing, I love watching movies and TV shows, clubbing, biking, and hanging out with family and friends. I love life.

Season One - Chained In Darkness

I’ve been betrayed by someone I trusted. Because of him, I was captured by my loathed enemy: The vampires. Right now, the sun is still high in the sky, but I know when it sets, I’m as good as dead. They can’t wait to get their fangs into me. I guess some would say I have it coming. I did raise a lot of hell with my Resistance crew, and I was planning on raising a hell of a lot more at dawn before I was sold out by Jonah. The vampires, werewolves and dragons, have been trying to track me down for months and I’d always been two steps ahead of them.
*Laughs* I guess my number is up. I just hope they make it quick. You see, the vampires in my reality aren’t the romantic lot you read about in books. They don’t sparkle or hang out at high schools with their teenage girlfriends. Hell no, vampires are brutal, calculating, sadistic and bloodthirsty. As a matter of fact, all of the monsters are! That’s how they were able to take over the world so easily and change an entire civilization to suit their needs. Whatever happens, I know it’s not going to be pretty, so I’m preparing myself for the worst. May God help me.

My worst nightmare has come true, I'm one of them now, a monster... the very thing I fought against. If that wasn't bad enough, I've been sired by one of the most powerful, sadistic and calculating vampire Lords in the city; Theoden. It's just the beginning of my new life, hell, I'm not even one night old as a vampire and already I wish they had decided to kill me instead of turn me. I guess this was my punishment for rebelling against them. They're clever that way. Theoden has promised to punish me for every offense I've made against him and I have no idea what's in store for me. I do know that it won't be pleasant. My night of pain and torment is just beginning.

My punishment at the hands of Theoden left me with wounds that scarred me to my core. That man has struck the fear of God into me and I don't know how to fight back. I don't know if I can. I feel like he's taking over who I was and making me into something he wants me to be. His slave and his disciple. I do know that I'm his property. His child, his blood runs through my veins and with it comes something so powerful that it consumes me in every way. He plans on teaching me what that means and I don't know who I'll be at the end of his lessons.

I lay here, exhausted and more confused than when my night first started. I've just discovered something else about myself that I wish wasn't true. Not only do I have to feed on the blood of humans, I've also found out that I need the "essence of a man" as Theoden called it, in order to survive. If that isn't enough on my plate, I know Theoden wants to break me down even more. He won't be happy until he's taken every part of me that wants to fight him and crushed it under his foot. He wants me to submit to him and I only pray that I can resist his hold over me.

As I awaken to this new night, I have no idea what Theoden has planned for me. I know there are more lessons he wants to teach me… I just don’t know how painful… or how pleasurable they will be. I do know that I’ve given into Theoden in ways that I’d never thought I would. Not only that, but he’s made me feel… pleasure unlike anything I’d ever experienced. I want to resist him, I need to resist him, but I’m finding it nearly impossible to resist him. His hold over me is stronger than my will to fight him and with each passing day, I know that I’m losing this battle. On top of personal experiences, I’m discovering secrets the human world never knew. I’m beginning to understand why the humans lost the war and how insignificant my rebellion actually was. This realization has been the cruelest lesson of all.

This book is the final episode of Season One.
It's a new night and that means more of Theoden's lessons, one of which I was still recuperating from. I was so out of control last night and if my current physical condition is any indicator, my brothers definitely had their way with me. As far as my relationship with Theoden goes, I can't help but feel drawn to him. I feel as though he’s accepting me as I'm accepting him in some morbid way. I don't know... maybe it's because I know I don't have any choices. There's no way out for me. I'm his and we both know it. Maybe there's still some fight left in me, some little nugget of Noel the man that hasn't been consumed by Noel the vampire. One can hope. I do know that this night feels different, like I’m coming to the last lap of a long, rigorous race. What is to become of me when this night comes to an end?