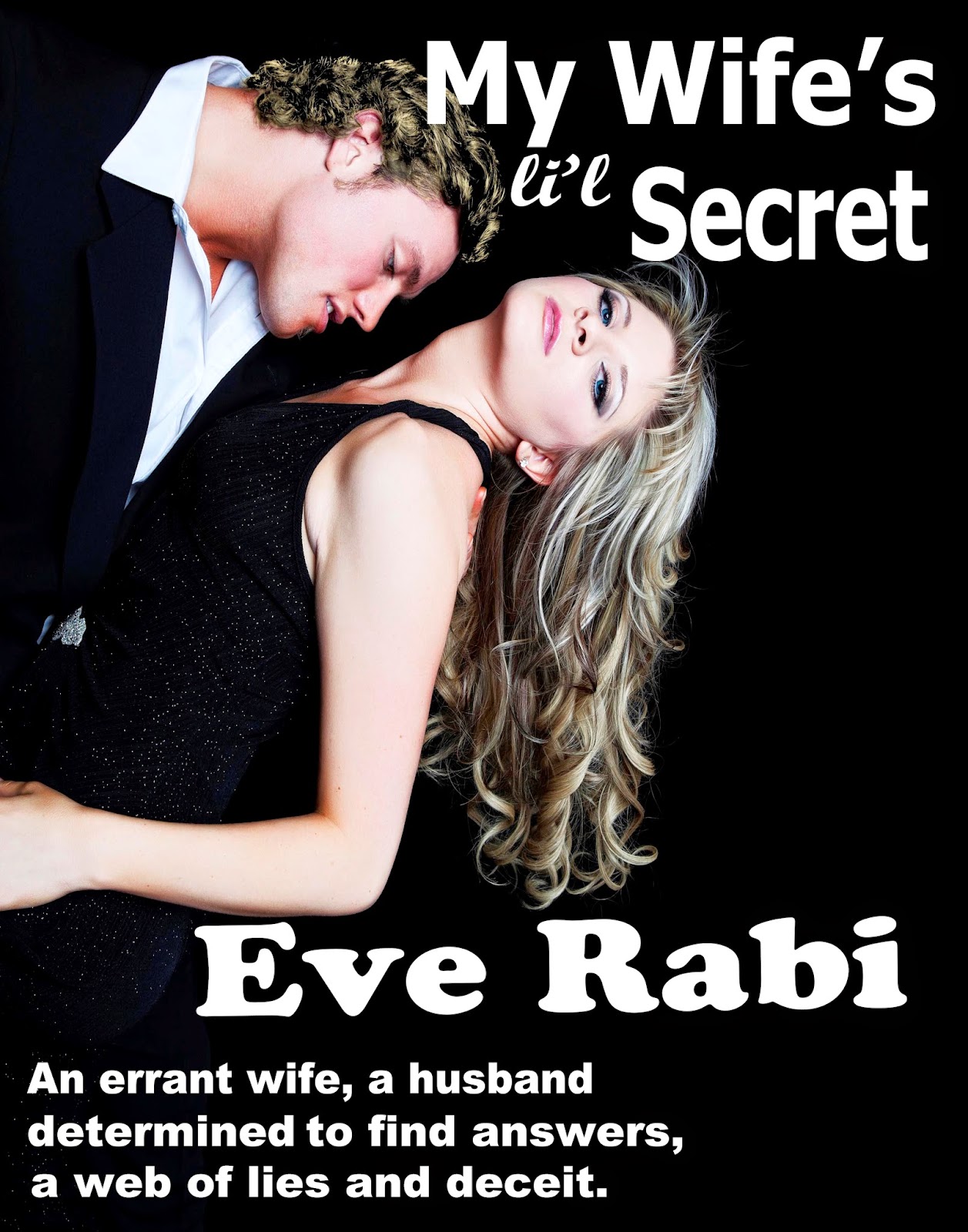 
She called me the miracle in her life, I called her my everything.

Sounds corny, I know, but I really believed I was the luckiest bastard on earth. I had the loving and supportive wife, a nurturing mother to our two precious girls, a thriving business and the future looked rosy. I was a contented man.

But overnight everything changed. My wife withdrew from me, ignored our children, and made it clear she was no longer interested in playing the role of wife and mother.

When her dressing began to change and she disappeared for hours, I suspected I was not enough for her.

Thinking she was having an affair, I placed my wife of five years under surveillance.

What my surveillance revealed shook my world, broke my heart and exposed a web of lies and deceit. 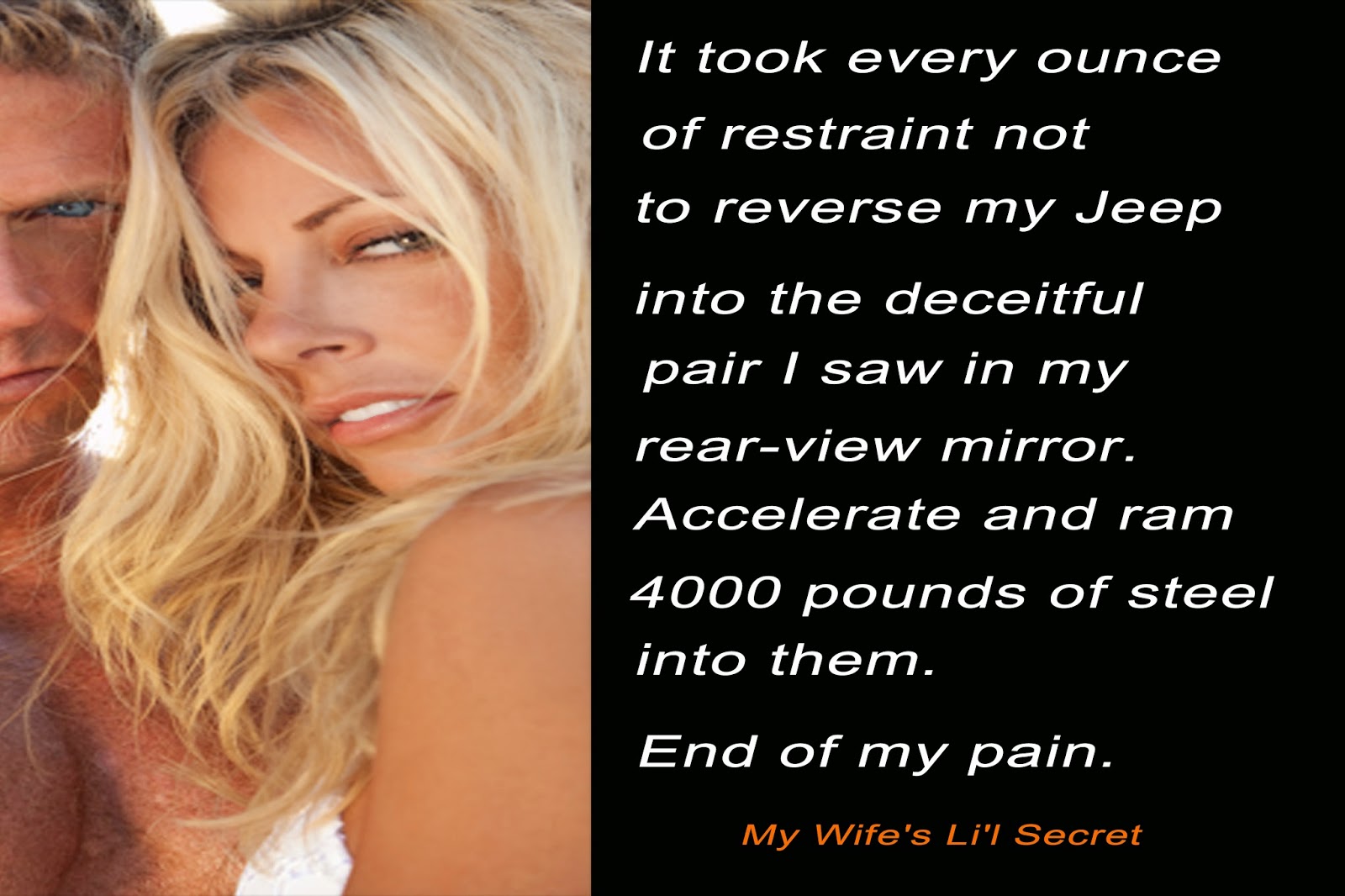 
What reviewers are saying about
My Wife's Li'l Secret...


"Wow I was totally entranced with this book from the beginning!"

"All in all I loved this book, it made me laugh, cry, hold my breath till I went blue, smile and finally caused my heart to break for Ritchie!"

"Twists that will blow your mind and make you think about this book long after you finish it." 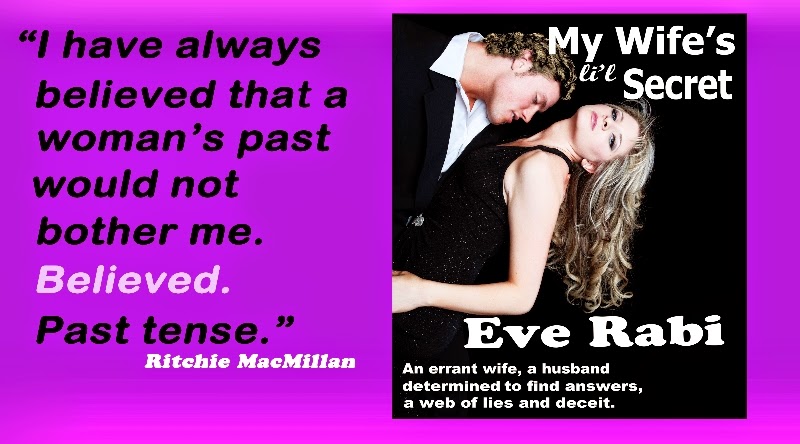 
Since my wife was out partying again, bedtime routine for our girls was left to me. Again. I tucked Ally and Becky into bed and began to read a story to them. “Once upon a time…”

“Dadda?” Ally said placing her hand on the storybook and stopping me from continuing.

I paused and looked at my daughter. “Yes, Alleycat?”

“Whaaaat?” I peered at my daughter wondering if I had heard correctly.

“The teacher at preschool, she said, ‘Here comes the hooka,’ when she saw Mummy.”

Slowly, I lowered the book and stared at my daughter. “It’s …it’s …”

How do I explain what a hooker is to a four-year-old? I shouldn’t even be in a position where I had to.

“The lady shouldn’t have said that, Ally,” I muttered.

Becky hated anyone interrupting a story, so to prevent her from getting mad with us, both Ally and I fell silent. I continued reading even though I was terribly distracted by Ally’s words.

“Talk about it tomorrow, Ally,” I muttered when the opportunity arose.

After the kids fell asleep, I sat in my lounge in the dark and pondered Ally’s teacher’s comment.

Liefie had great legs, a great figure and I had no problem with her wearing whatever she liked, but people were talking and clearly her dressing needed to be …addressed.

Of course I expected Liefie to become angry when I confronted her about it, accuse me of controlling her and after the number of arguments we had had, I was reluctant to talk to her about it.

But when I saw her the following evening, all dolled up and ready to party without her family again, hooker was the word, alright.

Her red skirt was the size of a large belt, her white top strained across her breasts and ended above her belly button, her fake tan looked like she’d dipped herself in food coloring and that garish, face paint with that dominating electric-blue eye shadow…reminded me of Braveheart.

She didn’t look pretty; she looked like an aging prostitute. Harsh words, I know, but they weren’t out of malice, they were simply an observation. (People were talking, remember?)

Tarty make-up aside, to my absolute surprise, she sported two piercings above her left eyebrows. My jaw fell.

When did that happen, I wondered? How could that happen? Why hadn’t she told me about it?

Of course it was her body and she was free to do what she liked to it, but facial piercings weren’t something I liked. She knew that.

She could have at least mentioned it to me before she pieced her face. We were husband and wife; it was reasonable to expect her to talk to me about something like that before she did it.

“What’s with the piercing?” I asked, both mesmerized and irritated by them.

She shrugged, flashed me a deal-with-it look and turned away.

With a weary sigh, I walked around to face her. “We need to talk.”

A guarded look flashed in her eyes before they hardened.

“Liefie, you need to dress more like a mother,” I said in a quiet voice. “You have two children and …”

Just as I had expected.

“There is nothing wrong with my dressing, okay?! Nothing!”

“Yes, there is, Liefie. Your skirts are too short, your tops are way too tight and the people at Ally’s school are talking about it. You need to …”

Her painted, pillar-box-red mouth twisted into a sneer. “You’re lying.”

She cocked her head and looked at me. “Who told you that?”

“Ally told me. She said one of the mothers or teachers, I can’t remember, after seeing you, used the word hooker.”

“That bitch! Where is she?!” She turned and strode off in search of Ally. Even though she was in heels, she almost ran.

“Liefie stop!” I cried running after her, shocked she would call her little daughter a bitch. “Leave her alone!”

She found Ally playing with Becky in the TV room. “Did you call me a hooker?” she demanded, putting her flaming face in Ally’s.

“Liefie stop this shit!” I warned.

Ally’s eyes flitted between Liefie’s and mine, a terrified look on her face.

Liefie suddenly backhanded Ally across the face, sending her crashing into a doll’s house.

Ally lay on the floor so stunned, she didn’t even cry. The only thing that showed her distress was puddle appearing around her waist.

For a moment, I too was stunned. Liefie had never ever hit our kids before.

Then fury overtook me – I grabbed my wife by the hair and slammed her against the wall.

Putting my face in hers, I snarled, “You ever touch my child like that and I will fuck the shit out of you, understand? UNDERSTAND?”

Her attempt to look defiant failed and I saw fear flicker in her eyes.

I had never hit Liefie before, never even called her names, so this wasn’t something she was used to.

“Don’t ever lay a finger on any of my daughters. Understand?” I pushed my face further into hers, resisting the urge to head-butt her.

“Daddy, stop! Daddy!” Ally cried, while Becky started to whimper. I looked over at my two children clinging to each other, terror on their little faces.

What am I doing?!

Quickly, I released Liefie and took a giant step back.

I walked over to Ally and Becky, scooped up both of them and hugged them to me. “It’s okay, it’s okay!”

They looked at their mother who stood holding her head with both hands, but did not try to go to her.

After a few moments, Liefie ran out of the room, shouting, “Your father is an abusive man! He just abused me in front of our children. That’s the kind of man I married!”

“Why did you tell her, Daddy?” Ally whispered, holding her tear-stained cheek.

“You knew she’d hit me, Daddy. You shouldn’t have told her.”

I peered at Ally. “What are you talking about? She doesn’t hit you, Ally. Usually. Right?”

“I need to change my pants,” Ally muttered, ignoring my questions.

My head jerked to look at little Becky.

You can’t be serious?!

My eyes shifted back to Ally. “This is the first time she hit you, right? Or does she hit you? Tell me, Ally.” I shook her. “Tell me!”

“All the time, Daddy,” Ally finally muttered. “Yesterday she hit me because I took too long to get Uncle Viggo’s beer. From the fridge.”

“WHAAAT?” She had my four-year-old daughter fetching alcohol for her brother?

I was mortified at what I was hearing.

If Liefie could hit my daughter that way in front of me, backhand her, what would she be doing behind my back? Aghast, I looked at my firstborn who I idolized. “Ally, honey, why didn’t you tell me this?”

“You weren’t here, Dadda. And Mummy said if I carry tales she’ll make me sorry.” Fat tears coursed down little Ally cheeks. I drew my girls closer, feeling absolutely gutted to know they were being silently abused by their own mother. “I’m sorry,” I said. “Daddy will make it stop. I’m so sorry. This is not going to happen again. I promise.” 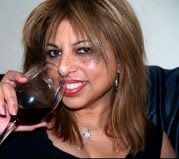 Eve Rabi lives in Sydney Australia, but was born in South Africa.

She is the author of 24 books and is known for her kick-ass leading ladies, her alpha males and her ability to make you cry and make you laugh as you fall in love.


She loves music and cannot live without it.


She also enjoys dancing, (was a Latin dance instructor years ago) and keeps her kids in line by threatening to bust a Zumba move in front of their school assembly.

a Rafflecopter giveaway
Posted by Unknown at 3:43 PM