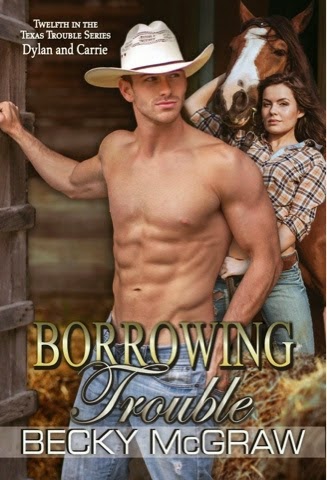 Ready or not, Dylan didn’t leave or back off.  His heat surrounded her, as his body crowded her from behind.  His fingers brushed her skin as he pushed her hair aside to lean over her shoulder.  He stuck his nose into the crook of her neck and inhaled deeply, then hovered here a moment with his hot breath tickling the shell of her ear.  The richer, deeper timber of his voice vibrated through her, as he finally asked, “You like to bake.  Is that why you smell like sugar cookies?”  Electricity zipped down her spine when his lips touched down briefly on a spot right behind her ear.  Carrie shivered and he laughed.

“Or do you just wear the dough behind your ear to tease me, because you know I have a weakness for sugar cookies?”  After a final flick of his hot, wet tongue, he moved away. Cool air hit the wet imprint left by his mouth, and Carrie shivered.  Her nails curled into her palms, and she sucked in a breath when they scraped her burn.  The spatula clattered to the stove, and she sucked the fleshy pad at the side of her palm into her mouth.

Dylan grabbed her hand to inspect it.  “Did you burn yourself?” he asked with concern. “We need to take you to the med shack and get Terri to bandage it.  I was headed out there when I heard the smoke alarm, but I didn’t see her out there.”

“It’s fine,” Carrie said tugging her hand away.  He didn’t let it go.  Instead, he brought it to his mouth and kissed it slowly as he held her gaze.  Carrie licked her lips, tasting the sugar cookies she had to taste test before she put them in the oven.  “Um, I, ah…” she stammered, at a loss for words as she stared at the blatant desire in his eyes.

“Do you ride?” he asked suddenly.

Her dazed mind spun trying to process the words.  “Since I could walk,” Carrie replied once she wrapped her mind around what he’d asked.

“I have a few days off for my arm to heal.  Will you go riding with me this afternoon?

You need to relax a little,” he said with a little smile.

Carrie didn’t know how spending time with this cowboy would lend itself to relaxation. Every time she got within three feet of him, she was wound tighter than she had been in years.  Being alone with him, wouldn’t help her put distance between them.  But her mouth opened, and “Yes,” fell out, before she could stop it.

She only had two days left here, and she couldn’t resist the opportunity to feel like a desirable woman once more.  That’s how he made her feel.  Something she hadn’t felt in three years, and wasn’t likely to feel again for a long time after she left this ranch.  Dylan made her forget her grief, forget her problems.  Carrie knew agreeing to spend time with him was just avoidance.  Her problems would still be there when she went back to her parents’ ranch.  Right now though, he would help her forget for an afternoon.

“Come out to the barn around two, and I’ll have the horses saddled.”

“I can help,” she offered, and her gaze fell to his shoulder.  “You’re hurt.  You shouldn’t be saddling anything.  Are you sure you’re okay to ride?”

He laughed and his smile broadened.  “I could ride with one arm tied behind my back.”

“I’ll ride with you, if you let me saddle the horses then,” she propositioned.

“Deal,” he replied and his deep voice vibrated along her nerve endings.  When he leaned toward her, Carrie held her breath.  His lips touched hers, lingered for a second, then with a playful little nip to her lower lip, he stood back up and smiled.  “You taste like sugar cookies.”

“That’s what the lumps of coal in the trash were,” she replied with an embarrassed laugh.
“Give me some of those beautiful biscuits, and a few of those cupcakes to take back to the bunkhouse with me.” Dylan eyed them over her shoulder.  “I’ll make some gravy to go with the biscuits for breakfast.”  His tongue made a circuit around his lips, and her eyes were dragged around with it.  Heat settled between her legs, and her lips sizzled.
She would give him the whole damned pan if he kissed her again.  But he didn’t.  He just stood there staring.  Waiting.  For her to do something.  Oh, yeah, ice the cupcakes and wrap up biscuits for him.  Heat shot up to her cheeks, and Carrie walked to the refrigerator to get the bowl of icing.  She iced the cupcakes, while he leaned against the counter watching her.  Moving around him, she brought the bowl to the sink, then opened the cabinet beside it to look for a container.  The one she wanted was on the upper shelf, and she couldn’t reach it even on her tip toes.  Huffing a frustrated breath, she balanced on her arms, then climbed up on the counter.  Sometimes it sucked being short, she thought, as she stood to drag it down from the top shelf.  When she turned around to get down Dylan was right there behind her.

He smiled up at her and put his hand at her knee.  “I couldn’t help you get it down, but I wanted to make sure you didn’t fall,” he informed with a shrug.

Carrie eased down to sit on the counter, and he grabbed the container from her to sit it on the counter, before he nudged her knees apart to make a space for his hips.  He slid his hands up her thighs to grip her hips, and Carrie’s heart did a leap in her chest.  “And I wanted a real kiss.  You’re at the perfect height now for that to happen.”

His eyes dropped to her mouth, and he licked his lips again.  “Kiss me, Carrie,” he invited, not making a move to kiss her.  He just waited, while staring at her mouth, which felt like it was on fire.  Carrie licked her own lips, then hesitantly leaned toward him, stopping when her mouth was within millimeters of his to catch her breath, to get her out of control heart to slow down.

“Kiss me, Carrie,” he whispered again.

She put her palms on his bare chest and his heated skin felt like smooth silk under her touch.  His warm, musky morning scent enflamed her senses, as she closed the space between them to take a tentative pass over his mouth with hers, then another.  That evidently wasn’t enough for him, because his left hand moved up from her hip.  He shoved his hand into her hair, cradling her skull to pull her closer, as his mouth devoured hers.  He feasted on her lips like they were the best thing he’d ever tasted.

His were the best she had tasted in a helluva long time, that was for sure.  Minty toothpaste, and the sweetness of the man kissing her flooded her senses.  Carrie couldn’t get enough of him.  Her hands moved to circle his neck and pull him closer still.  He was right, this counter was at the perfect height for kissing and so much more.

The inside of her knee brushed the warm skin at his hip, where his pajama pants rode low. Fire shot up the inside of her thigh to her center and she throbbed there in time with her heart.  Without conscious thought, Carrie wrapped her legs around his waist to pull him closer to where she needed him.  Dylan moaned into her mouth, and his tongue courted hers in time with his hips, as he ground himself into her.

His erection hit her in just the perfect spot, and her breath came in short pants as her pleasure inched up with each stroke.  When she couldn’t breathe, she dragged her mouth from his and threw her head back.  His lips latched onto the side of her neck and he sucked her there.  Carrie moaned loudly, thrusting her hips against him, reaching for the release that was just out of her reach.  “Oh, God, Dylan…yes, make me come,” she whispered hotly.

His fingers dug into her right hip, as he continued to suck her neck.  “Lord, woman…I want to fuck you right here on Penny’s counter,” he growled into her ear, increasing the pace of his thrusts.

That was the hottest damned thing Carrie had ever heard.  The only place she’d ever made love was in the bedroom.  Behind closed doors.  Most of the time with the kids rattling the doorknob, or yelling for her.  Just the naughty image of doing it right here that flickered through her mind, sent her tumbling over the edge.

You can find Amazon Bestselling Author Becky McGraw at: